The EMS Compact facilitates the day-to-day movement of EMS personnel across state boundaries in the performance of their duties. EMS personnel, including EMTs and Paramedics, licensed in a compact member state are granted a Privilege to Practice in the other compact member states. The EMS Compact is a legal agreement between states, enacted by state legislation in over 20 states. A Member State is a state that has passed the Recognition of Emergency Medical Services Personnel Licensure Interstate Compact (REPLICA) legislation.

Components of the EMS Compact 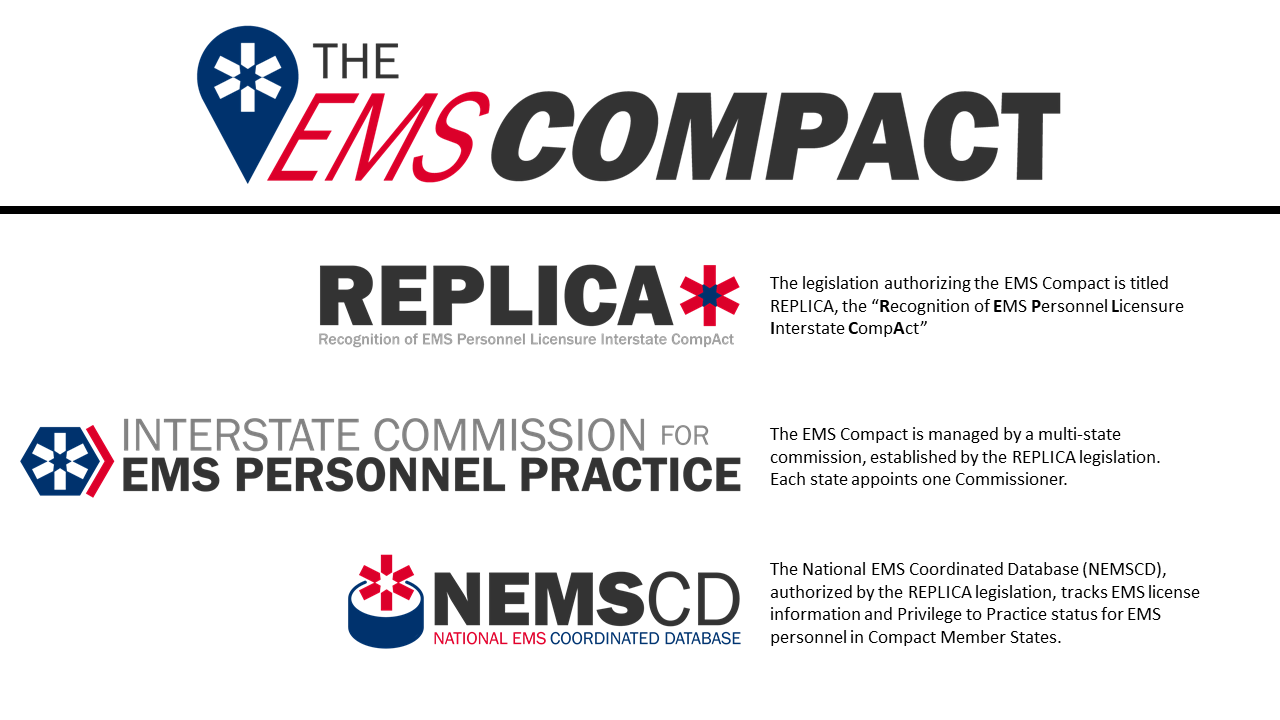 Overview of the EMS Compact

Since the early 1970’s, state EMS offices have been issuing licenses to prehospital care personnel. As a means of regulating the practice and protecting the public, EMS personnel licensure is as necessary and important as that of physicians, nurses and members of allied health care professions. The profession continues its evolution and the role of EMS personnel has seen significant growth. Today regional systems of response with multi-state footprints, staffing for large scale responses that are not at the level of a governor’s declaration of disaster, and planned special events (concerts, sporting events) are common. This multi-state need has refocused the discussion how to formally recognize an EMS providers ability to practice in multiple states without having to carry multiple licenses.

The Recognition of EMS Personnel Licensure Interstate CompAct (REPLICA) is the collective solution to cross border-licensing issues that have been managed by state EMS Offices in various ad hoc manners for years. With the implementation of an Interstate Compact, EMS will join the ranks of other professionals such as physicians, nurses and emergency managers. The Emergency Management Compact (EMAC) is a well-known example with which EMS personnel are familiar. Compacts create agreements between states outside of the federal government, allowing for states to preserve “home rule” and flexibility in the management of these entities. The United States Constitution, grants the right for the states to enter into multistate agreements for a common benefit. Every state in the nation has joined a minimum of five compacts as a means of addressing issues they share that are in need of a common solution.